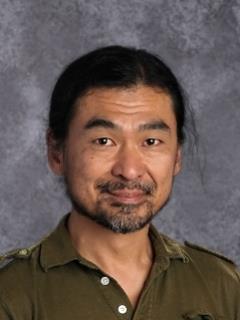 Hyung Nam was born in South Korea, but moved to Los Angeles at the age of seven. While he was in Los Angeles, he started to get into music and started playing in a band. Nam lived in Los Angeles until he went to Reed College in Portland. He majored in philosophy and political science. In 2000, Nam started teaching at Franklin High School before he moved to Wells in 2002. Nam has now taught Social Studies for over 20 years. This year is the first time he has taught beginning guitar in over a decade. Nam loves music. He has played in bands for multiple decades and is still playing gigs now when he can.